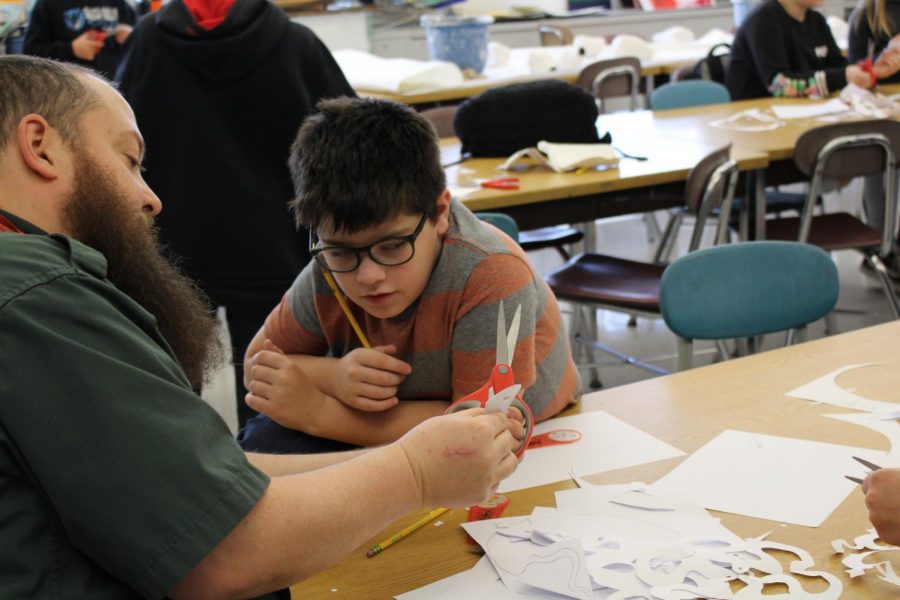 Mr. Gregg, art teacher, demonstrates to fifth grader Sam Giovengo how to cut a snowflake from paper during art class.

This year, the 2018-2019 school year, the FMS Staff have decided to try out a new schedule for the middle school’s Arts Block rotation. Instead of rotating every nine weeks, middle school students are assigned to a new Arts Block class every six weeks. Mr. Ryan Smith, Freedom Middle School principal, claims that, so far, everything is running smoothly. He says that even if the Arts Block teachers had to cut some material from their curriculum, all students now have the opportunity to have all electives.

“Every year, we reflect on the good and bad things in the schedule and make the necessary changes,” Smith says.

The reason why Smith decided to ask the staff to come up with this new schedule was so that students would have exposure to all of the elective classes. Also, Mrs. Marburger, technology teacher, can now teach 5-8 grade, which gives the students more opportunities for computer instruction and opened up a new schedule.

Ms. Ging, sixth grade teacher, likes the new schedule because students have lots of different opportunities in physical education and arts. However, she says that, if she could make any adjustments to the schedule, she would allow students to choose when you want to have particular classes.

Tyler Misencik, a sixth grade student, looks down on the schedule.

“It gives students less time for activities. For instance, in Art and Technology Education (Tech Ed), we don’t have enough time for projects,” Misencik says.

If he could change it entirely, he would return to the nine week schedule because the six week rotations get confusing. Students get report cards every nine weeks, but change Arts Block every six weeks.