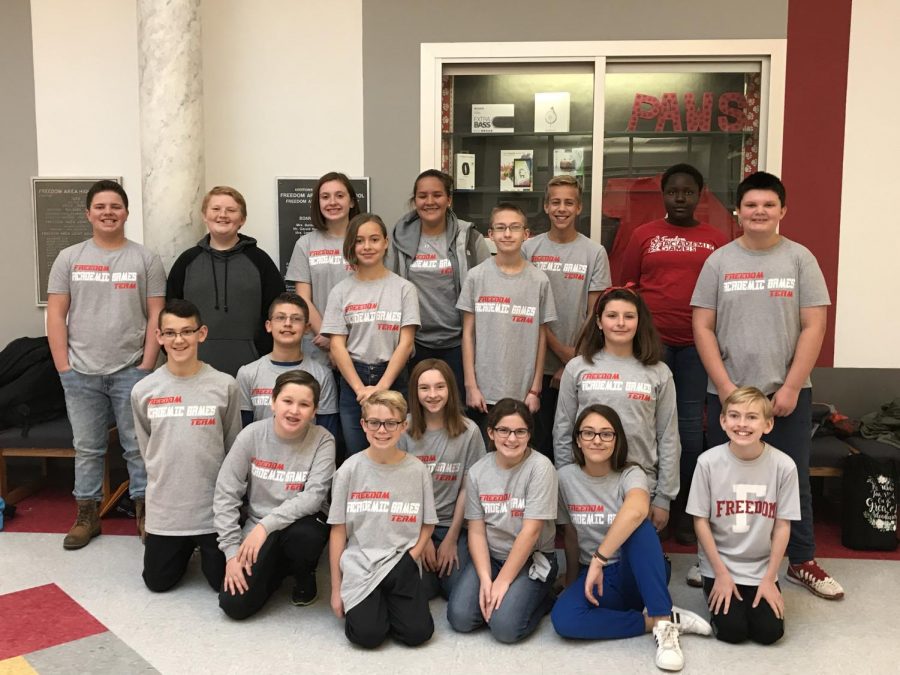 The Freedom Middle School Academic Games team waits in the lobby for their bus before departing for the Propaganda competition at Geneva College on Nov. 15.

The 2018 Academic Games season started in September. Ever since then, the team’s members have been working very hard to practice and to achieve their goals of qualifying for the Academic Games League of America’s (AGLOA) National tournament. It will be held from April 26-29, 2019 in Orlando, Florida. At the National tournament, players will compete in games of their choice, but in order to  make it to Nationals, you have to qualify in two events at the local competition. To qualify, a player’s score must be in the top 15% of all of the players who are competing locally.

So far, only the Propaganda tournament has been completed. Propaganda is when an announcer (often times a teacher from another school) reads a sentence, and the player has to choose which persuasive technique has been used. The Beaver County Academic Games League Propaganda tournament took place on Thurs., Nov. 15 at Geneva College.  There were five qualifiers from Freedom, four sixth graders, Camden Bruce, Sara Harp, Alexa Hudak, and Joanna Odebode, and also one eighth grader, Luke Snavely. They are all one step closer to making it to Orlando. The remaining events for this school year are Current Events, Equations and Presidents. Make sure to wish all the participants luck for their next competitions.