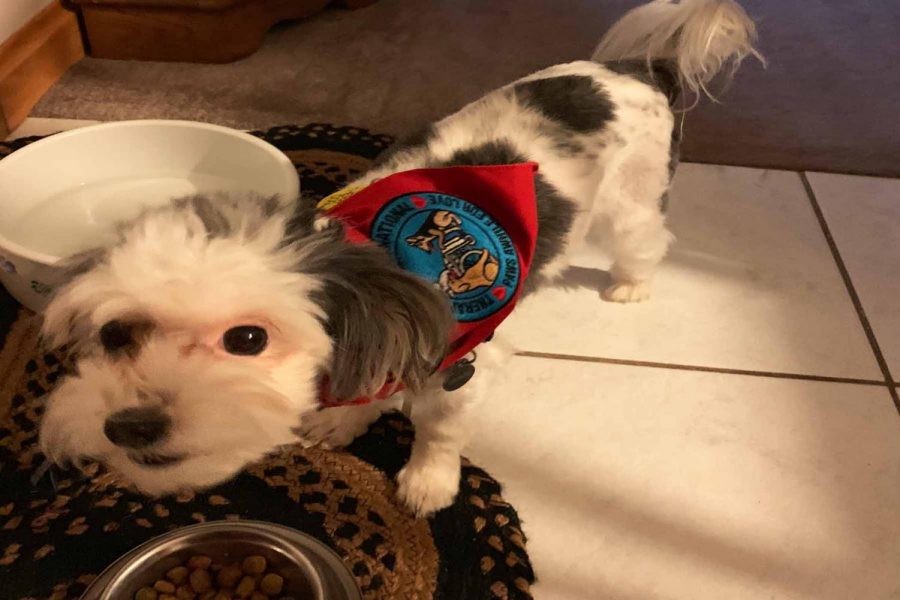 Georgie with his mandatory therapy dog scarf on being rewarded after working.

Ms. Wendy Clibbens is a K-8 math intervention specialist for Freedom Area Schools District and about 2 years ago she got a Maltipoo named Georgie. Georgie is a therapy dog and helps people of all ages, from little kids all the way to elders. Lately there has been a shortage of therapy dogs all across Pa, and the reason is there are more people who want a therapy dog than there are therapy dogs.

Some people think service dogs are the same as therapy dogs but they are not. Service dogs help people with disabilities like visual impairment, hearing impairments, mental disorders (such as post traumatic stress disorder), seizures, mobility impairment, and diabetes. Therapy dogs help with things like anxiety, depression, and autism.They also go to places like hospitals, retirement homes, nursing homes, schools, hospices and disaster areas to make people feel better. Even though service dogs and therapy dogs  are different they are alot alike. They both help with the human society and improving the lives of people.

It’s not as easy to be a therapy dog as people think. To be a therapy dog there are many rules, requirements  and tests that need to be done in order to be certified, such as the dog/handler teams are lined up to be checked in (simulating a visit), visiting with a patient, and a recall on a 20 ft leash.  Clibbens was contacted by the TDI (Therapy Dogs International) to see if she can go to nursing homes 2 times a day because of the shortage. That is alot for a dog and for the owner.

“The [tests] all seem pretty simple but they are NOT. Georgie did well on all of them but he almost did not succeed on the 20ft. leash recall. Could you imagine walking 20ft away from your parent at all times? It’s not easy.” said Clibbens.

After Georgie was done with his training it was time to go to a nursing home for his first time. It was very scary for Clibbens because she didn’t know how Georgie was going to act. Their first patient was a 100 year old blind man. The man was very happy when Georgie came to see him but Clibbens was scared especially since the man was blind. The man asked to hold Georgie and snuggle Georgie. Clibbens placed Georgie on his lap and Georgie sat there as still as a statue. After that, Clibbens wasn’t scared anymore with Georgie going to meet new people.

Georgie also acts very well with children. On Nov. 13, Georgie went to the Beaver Library and read with the children that came on that day. The library wants to make him a regular and come in more days for Reading with Georgie.