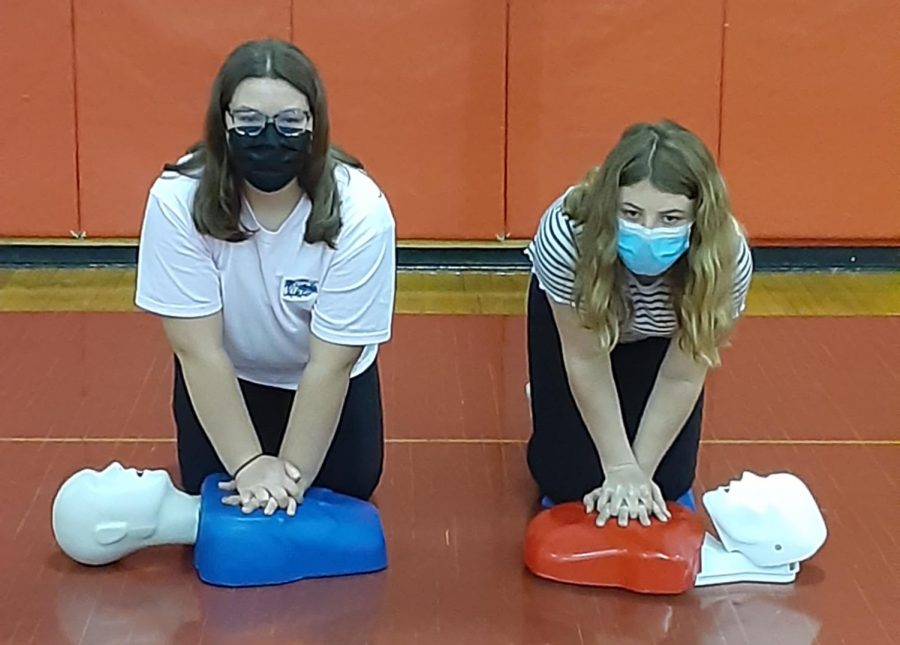 CPR and first aid are two vital tools that save lives, though only 2.5% of bystanders intervene when they are a witness to an emergency. Due to this fact, Mrs. Smithmyer, the middle school health and gym teacher, began educating her fifth and sixth-grade classes on these skills.

Cardiopulmonary resuscitation, or CPR, is an emergency procedure that comes into effect when an individual’s heart stops beating. To do this correctly, perform 30 chest compressions and two rescue breaths. Perform the compressions to the beat of “Staying Alive” by the Bee Gees.

“I think the biggest mistake (when performing CPR) is that they do not even want to start,” states Smithmyer, “but people also do not keep their arms locked. They get tired fast because they assert a lot of energy when giving CPR, and you have to do it for about 15 to 20 minutes before EMS arrives.”

Smithmyer adds, “you want to be up over your victim. Your hands should be over each other, interlocked, and the heel of the hand should be in the center of their chest. Arms should be locked and straight so you can perform deep compressions.”

Although Smithmyer, and previously Mr. Matsook, were only teaching seventh and eighth grade CPR, she wanted to make a change this school year since she had the opportunity. She wants all her students to have the ability to make a difference in an emergency and have the skills to do so.

Kendall Climo, a sixth grader, participated in Smithmyer’s CPR lesson during the third nine weeks. “I feel like we needed to learn it, so I liked it,” Climo says, “you should learn early.”